Time for the monthly report. What's gone on in this mixed bag of a November...?

First of all in our report... the biggest news is that we FINALLY hit that all important century on Lust & Liberty sales. Of course, in the grand scheme of things, 100 copies of a book is not a huge amount. But for a self-published first novel with very little marketing beyond word-of-mouth and the occasional social media post, that isn't bad going. Bearing in mind, as I've said in previous posts, that most self-published authors don't even sell 50 copies of their first book at all, much less 100 in just over a year!

In celebration of this milestone, I decided to run a little giveaway: 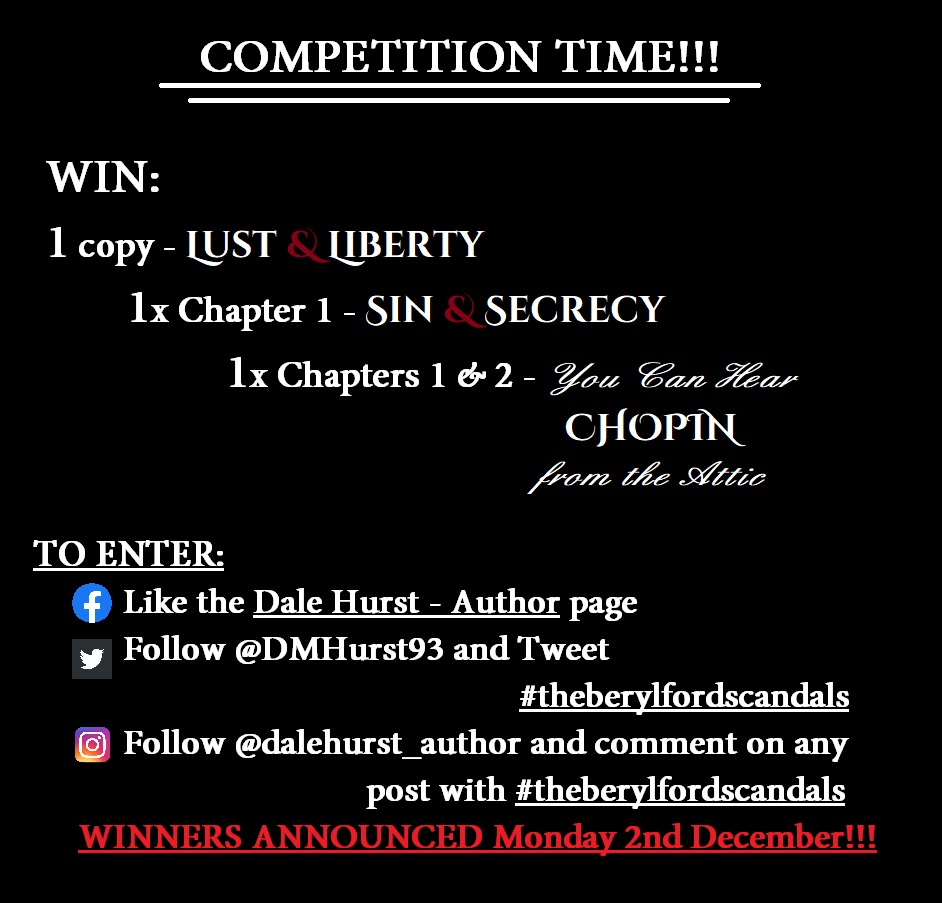 Quite simple really. And lots of exclusive free stuff being given away. Some of the sample chapters from the next two books have not been released publicly at all -- namely those of You Can Hear Chopin from the Attic. The reason there's two chapters being given away there is because the first is not very long and serves more as a setup for the second.

So, if you're interested in winning that, just follow any one of those social media instructions. Literally all you need to do. Links to my social media channels are all available at the foot of this article, by the way.

Moving on now, here's the progress report for the last month.

It has been yet another period in which journalism work has had to take priority. But I have tried to relate some of my work to my capacity as an author, in particular in some episodes of the HQB Media podcast. Whether that's discussing ideas for new stories, general inspirations for Lust & Liberty or interviewing up-and-coming authors. I'd recommend having a listen as the feature has proven very popular so far - many have regarded them as both interesting and amusing. Which is what we were going for, after all.

There's also been some movement in my old food blog Expensive Tastes. Particularly a video I reposted from HQB Media, showing a professional bartender making a cocktail. It used a specific brand of gin, so I tagged the distillery, who in turn reposted it to all their followers. In short, it has revamped my desire to run that blog, but I think I will do so a little differently moving forward. More on that to come, though.

Revisions on the sequel to Lust & Liberty continue. We are, on paper, nearing the end. But a number of changes I have decided to implement at this late stage will require a lot of original additions. But that's proving to be part of the fun, I think. Even better though, I'm having ideas for scenes and chapters that are allowing me to tie pre-existing loose plot points together, and set up events that were, otherwise, just happening. The Christmas release will no longer be feasible -- I am hoping, at the rate I'm going, to have a finished final draft ready before the New Year, with a mind to publish in early 2020. Stay tuned with that!

The base inspiration for You Can Hear Chopin from the Attic came from a dream. And recently, another vivid subconscious vision inspired something which I think will serve as my fourth book. I'm not giving any details away yet (there's not much to tell at the moment!) Just be aware that the cogs are already turning for future projects.