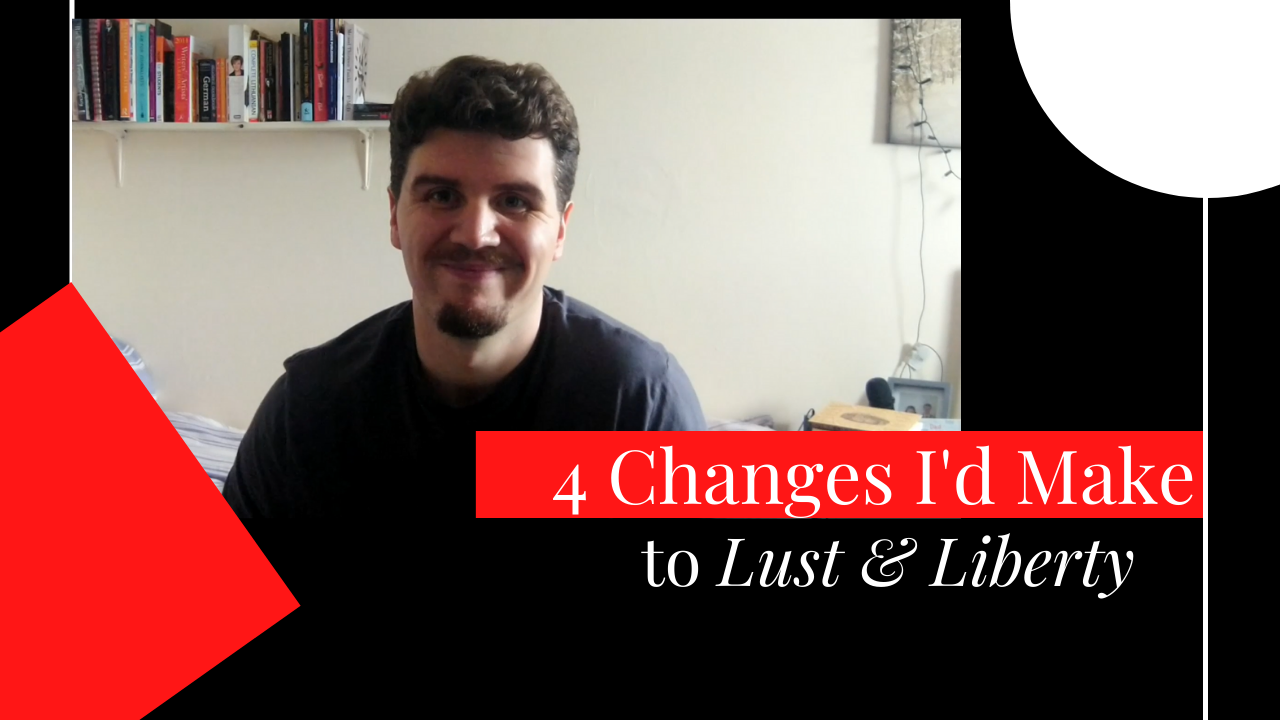 Our latest blog-vlog deals with a bit of retrospect. Looking over our first book, after having gained more education on writing, how many rules did we break? And what changes would we make to Lust & Liberty if we had our time again…?

I chucked a post up on my socials the other day with a relatively simple caption. Concerning how I could look over my past work and realise how many rules I broke before doing a Masters in Creative Writing and Publishing. For years up until that point, I was always a believer that there are no rules in writing. And, indeed, a few followers told me that the rules are there to be broken. All the same, it left me wondering… if I had my time again, what changes would I make to Lust & Liberty?

The video below, and the blog post that follows, explores that question further.

This is something I have refused to believe in the past. Having grown up reading the likes of J. K. Rowling, who uses adverbs quite liberally in her work, I was given to understand that this was normal practice. And then I read Stephen King’s On Writing and realised that that is not the case at all. When I first heard about this rule, I was torn between thinking it was just a well-established author being pretentious, and believing that it made sense. Obviously not enough to avoid phrases in Lust & Liberty like “returned caustically.”

If I were to completely redraft the first Berylford Scandal, I would take some of the gratuitous adverbs out.

NOT Reduce SPACING and Margins as in the video — this was a mistake, and it was too late to amend it. The font size in the paperback version, despite being 12pt in fact, looks HUGE. It is single-spaced, 12pt size, and yet there is room for about 13 or 14 lines per page. It looks ridiculous in hindsight, and I made doubly sure to make the margins narrower and knock the font size down to 10pt for the sequel. That looks like a natural size for a book. It would also bring the 500-odd page count down considerably. Which in turn, makes for cheaper printing costs.

If we’re bringing that page count down, why not take the opportunity to expand certain storylines? I cut out a lot of subplots when I was fine-tuning Lust & Liberty, and others ended up diluted. Such as that between Mrs Haffisidge and her nephew-in-law Luke Warwick. I also felt like Mrs Urmstone, intended to be a deuteragonist of the entire story, was given a lot less to do in the end. In both cases, I would seek to expand.

While we’re on the track of major characters, feedback has suggested that the main anti-heroine, Lady Vyrrington, doesn’t undergo much development. Fair point — she doesn’t have so much a character arc as much as a full circle. She begins the story grieved and, spoiler alert, she ends the story grieved. Her character is much changed by the end, and only accelerates leading up to the events of the second book. However, I don’t think it was as clearly pronounced in Lust & Liberty as it could have been. So I would go over that, if I had my time again.

WHERE CAN I BUY LUST & LIBERTY?

You can buy my first novel, The Berylford Scandals: Lust & Liberty, from Amazon in paperback or on Kindle by clicking here.

Do you agree (or disagree)? Why not let me know in the comments? For more author news and views, my Facebook and Instagram pages are here.

In a tale that is largely melodramatic and themed around death and domestic drama, there needs to be some form of comic relief. And The Berylford Scandals' answer to that is Elspeth Urmstone, in my opinion. While fulfilling the town gossip archetype, I needed to explore beyond that and make her prone to accidental ridicule. And to say things she does not quite mean. All this is harnessed in her conservatism, which applies to everything she does in her life. In her style of dress, in her social attitudes, all the way to the food she eats. In many ways, she is a tribute to all well-meaning women who come off as not especially nice people. We all know a Mrs Urmstone in some way, I think. You cannot hate her totally, for she is staunchly loyal to the friends she has - Lady Vyrrington and Mrs Haffisidge - almost to a fault. She will not tolerate a word against either of them, even in the face of scandal.

Some of my favourite moments of Mrs Urmstone take place in narrative that I ultimately had to remove from Lust & Liberty. Indeed, in the original novel, we meet her at the same time as Lady Vyrrington, Lord Wilson, Abel Stirkwhistle and other pivotal characters, as they attend a party. She is with their hostess, Lady Riva Bært-Styridge and her sister Juvelia, at odds with the Scandinavian food on offer...

from the original Chapter I of The Berylford Scandals: Lust & Liberty

Food was laid out at liberty to be taken by the guests on a table in the large drawing room.  At least half of this table was filled with delicacies native to Norway and Denmark. Such delicacies included raskekako: dumplings filled with bacon; sursild: a type of pickled herring that was served with rye bread; and, on a sweeter note, pikekyss: a baked meringue. There were also slices of fish, which were slightly odd in appearance in the opinion of the fastidious Miss Elspeth Hawthcourt who, much to the embarrassment of her much better–composed sister Juvelia, questioned Lady Riva on the dish.

She spoke in the most sophisticated and elegantly–presented English, yet maintained her smooth and – to an extent – deep contralto Norwegian accent. Some of her sounds were embellished with a refined trill of her tongue. With the words native to her own language, her voice seemed to deepen even further, yet managed to add to the refinement of her pronunciation and intonation.

“It looks rather unfortunate to be cod,” returned Miss Elspeth, “Has something tragic occurred to it?”

Lady Riva chuckled, as did Miss Juvelia, the latter nervously in response to her sister’s incredulous questions.

“It is a dish that originated by accident, you could say, Miss Elspeth,” Lady Riva said, “the legend is that: a fire was started in the house of a poor family who were eating cod that night. They, of course, fled the house which collapsed in the fire, and ash covered the fish. A subsequent rainstorm caused the ash to seep into the fish meat. When uncovering the remains, the family found it and they were certainly in no position to dispose of the food. And thusly, that is how klippfisk came about.”

Miss Elspeth grimaced, diverting her hand from the platter on which the klippfisk was being served.

“Perhaps... I will decline this time, Lady Riva,” she said.

“Of course, Miss Elspeth. Admittedly, it most certainly is an acquired taste. Instead, I can recommend the cheeses that we Norwegians offer.”

“Cheeses?” Miss Elspeth remarked excitedly, as she was only too partial to it, “I was not aware cheese was available in Norway.”

“But of course there is cheese, Miss Elspeth. I can thoroughly recommend to you the gammelost,” said Lady Riva, pointing at a waxy–looking cheese.

Miss Elspeth observed it, again grimacing at what the Countess had suggested to her. It was of a most pungent aroma.

“Might I ask how much one is recommended to slice?” she said.

“I would recommend you have a care with how much you slice. Gammelost is a rare cheese. Very difficult to find nowadays.” She slanted a sideways glance at Miss Juvelia.

Miss Elspeth took up one of the many cheese knives that lay beside the plate on which the gammelost, as well as all the other cheeses that were there with it, was set.

Very hesitantly, she cut herself a very thin slice of the gammelost, and an equally–thin piece of bread. Placing the two together and pressing them between her fingers and thumb, she held them to her lips, squinting at the tanginess of the cheese’s smell.

Miss Juvelia and the Countess watched her as she hindered herself in taking the cheese. She diverted her eyes from her food and smiled nervously at them both. The Countess of Styridge’s eyes widened as if to press Miss Elspeth to continue. Taking this hint, and giving another reluctant half–smile, Miss Elspeth opened her mouth, screwing her eyes shut and biting at thin strip of the bread and the gammelost at the same time, and immediately shutting her mouth, opening one eye slightly to see if the Countess and her sister were still watching her, which they were. In order to keep up appearances – a principle only too important to Miss Elspeth – she smiled and kept her eyes shut as she chewed what she had taken.

As she chewed, Lady Riva turned her back to Miss Elspeth and whispered to Miss Juvelia:

“Gammelost, in English, is literal for old cheese.”

Miss Elspeth did not chew for long, and swallowed the cheese in order to rid herself of the flavour, which resembled that of sour milk. She grimaced once again as soon as she had swallowed, and then opened her eyes slowly, smiling as she saw that Lady Riva and Miss Juvelia were still watching her.

“Definitely... an acquired taste, Your Ladyship,” she said, maintaining her false smile.

Despite now being one of the main characters of The Berylford Scandals series, Mrs Urmstone was originally a background character that only appeared in one short scene in the original novel. It was the subsequent revisions that took this interfering and shrill old bat and reworked her into a socialite of the same rank as Lady Vyrrington, not to mention one of her closest friends. And then we gave her a dead husband, plus a Scottish heritage that associated with royalty back in the day. This was to give her some vulnerability - Mrs Urmstone is somewhat ashamed that, despite marrying the Lord Mayor of the town she loves, she has not earned a title or any substantial fortune, unlike her sister Juvelia.

Mrs Urmstone fills the archetypal town gossip role, most notably Miss Octavia Pole from Elizabeth Gaskell's Cranford. Another woman who is so committed to nosing into others' business that she does not come off as particularly nice to know, but loyal to a fault. Mrs Urmstone's eccentricity and waspish words are also in part inspired by Betsey Trotwood from Dickens' David Copperfield. If ever she were to retire to the seaside, I wouldn't put it past her to oust all unwelcome visitors (and donkeys) off of her property.

Do you love or hate Mrs Urmstone? Does she remind you of anyone - both real-life or fictional? Let us know in the comments section. Take a look at our other characters, and follow us on Facebook, Twitter and Instagram to keep up with our news...