A recent, first-time trip to Leeds inspired me to revive an old blogging niche. Namely, writing restaurant reviews. Beginning with a dream of a meal at a place called Brontaè’s…

We take as the subject for today’s review, Brontaè’s Bar & Restaurant, situated in Horsforth, within Leeds. I recently ventured up north for the first time in my life, with one primary purpose: to visit this restaurant. Ever since owner and founding head chef, my Northern Namesake Dale Spink planted the seed back when I interviewed him for an article much earlier in the year. Last week, I finally made it. And I’ll say right off the bat that it was well worth the wait.

There were several contenders for the role of starter at this meal. Confit Duck Leg. Pigs Cheek and Chorizo. Scallops with a roe tuile and parsnip purée (among other things). But in the end, I could not resist a classic pâté to begin my dinner. Except the pâté dish at Brontaè’s is anything but classic. For one thing, it shares its stage with a rather striking co-star, a pea tart. 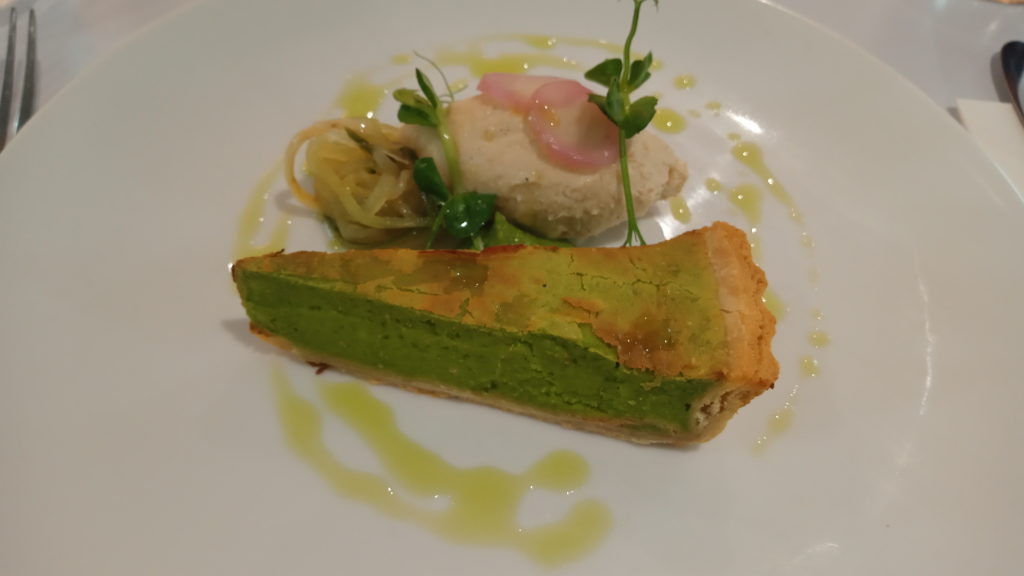 In all the years I’ve reviewed restaurants and sampled pâté dishes, I had never seen anything like it. And that uniqueness transferred right into the flavours. The  pâté, which the menu revealed contained white chocolate, soft cheese and horseradish among other things, was a vehicle for fierce, fishy saltiness. A saltiness that was balanced out, in turn, by the pea tart, with its subtly savoury filling and perfectly flaky pastry.

Honestly, it was a massive fight with myself not to scrape the ceramic off the plate for every last morsel. Of all those delicious-sounding starters, I definitely made the right choice!

Wow, where to start with this one… 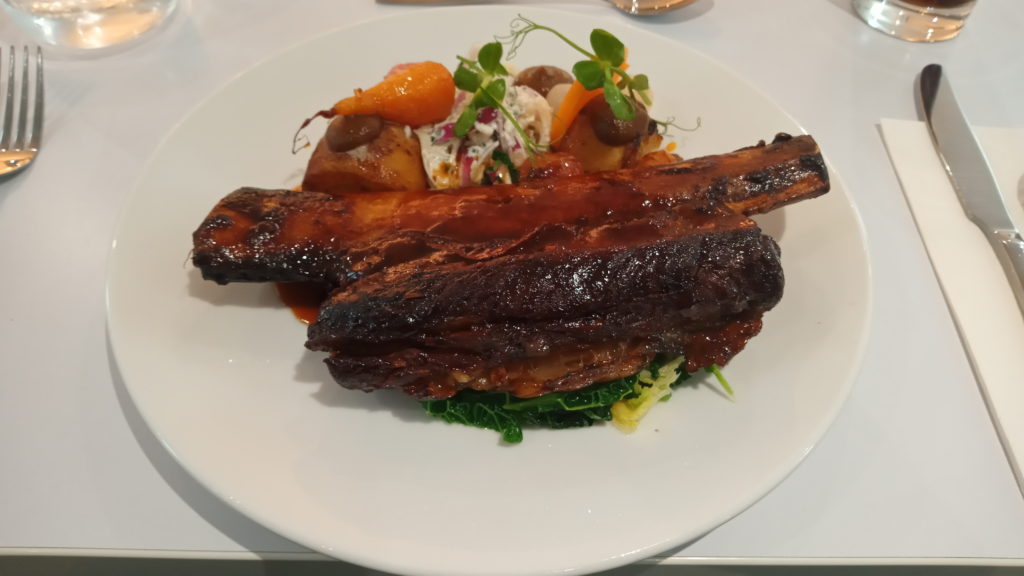 Since following Brontaè’s on social media earlier in the year, I’d come to understand the Slow-Braised Jacob’s Ladder is something of a fan favourite among the main courses. So, despite the presence of Herb-Crusted Coley, Ham Hock & Wholegrain Mustard Pie, and Crispy Pork Belly on the menu, how could I have anything other than the Jacob’s Ladder?

(Jacob’s Ladder is a ribs dish, for anyone wondering).

Certainly a colourful, eye-catching entrée. The meat still clinging to an utter weapon of a rib, and surrounded by all manner of vegetables (roasted, pickled, steamed). You don’t get this at your common-or-garden Sunday roast, nor your everyday barbeque. This was something truly special. And the meat just fell apart with the fork and, to affect an age-old cliché, melted in the mouth. If you wanted to illustrate the word ‘succulent’, just order this dish. 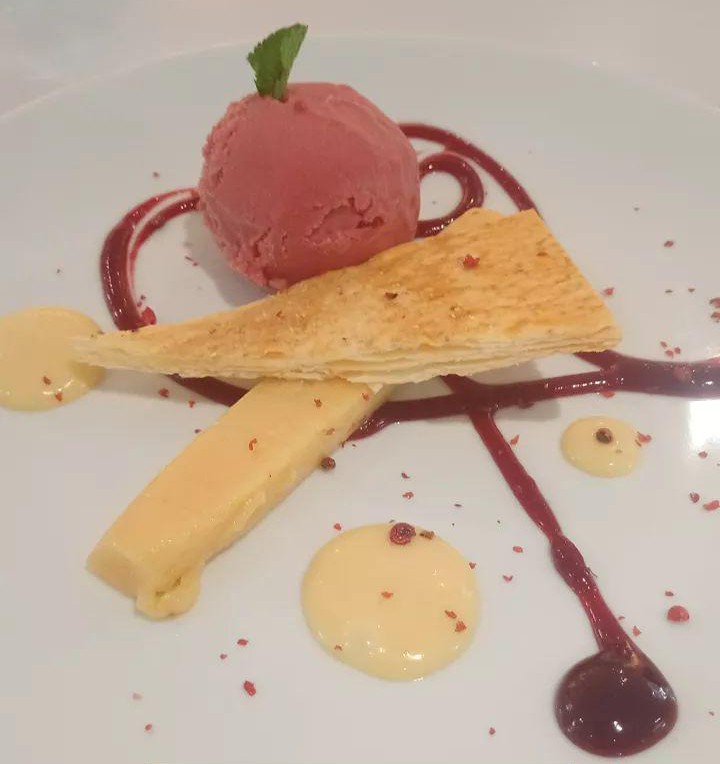 It was a struggle to know whether or not my stomach could take another hit with dessert. But one that we worked through. And thankfully, our choice was perfectly light and understated. A delicate note to follow two hefty portions. In the form of what Brontaè’s calls a Lemon Cello Tart.

I guess you could argue that this dessert was “deconstructed”. In the sense that the lemon curd filling was lying on the plate, a slice of pastry lying otherwise separate on top of it. Not by any means a disappointment; just not a tart in the same way as the pea tart from the starter.

Semantics aside, the dessert was delicious. The person who discovered the dream team that is lemon, raspberry and white chocolate, is a genius. And it was a joy to see all those elements playing parts in this dish. Speaking of combinations, the sorbet was a surprising thing — it was raspberry and peppercorn. It still amazes me now as I’m writing this how the dry heat from the pepper could cut through the tartness of the lemon and the raspberry and actually improve those flavours, rather than ruin them.

As I was paying my bill, I turned to the waitress and said, “If I get COVID tomorrow and that’s the last thing I ever tasted, I’ll be very happy”. Nothing could be truer. The best meal to kick off a city break in Leeds. Even in restaurants where I have counted the staff among my good friends have I received such a warm welcome off the bat as I did at Brontaè’s. And throughout, the line I kept repeating after finishing each dish (or sometimes just partway through) was “Dale Spink is a genius”.

Getting to see the man himself in action, even for just a couple of minutes, was the icing on the proverbial cake. The restaurant floor gives on to the open kitchen, which allows you to watch the chefs work their magic if you’re sitting in the right place. All adds to the overall experience in my opinion.

Throughout my stay in Leeds, I spoke to a fair few people about Brontaè’s and it stunned me how none of them had heard of it. If you’re local to the area, you have no excuse. Book your table now! And if you’re on a city break of your own up in the area, make a plan to visit. You will not be disappointed. Full marks.

For more author news and views, my Facebook and Instagram pages are here. And drop a subscription to my YouTube channel to remain informed of the latest, plus some exclusives. Furthermore, my fortnightly podcast, The Dale Hurst Writing Show, is available to listen to here on Spotify. 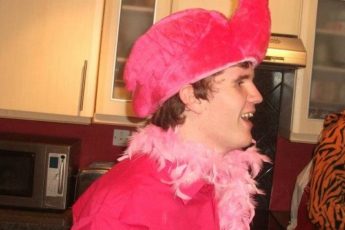