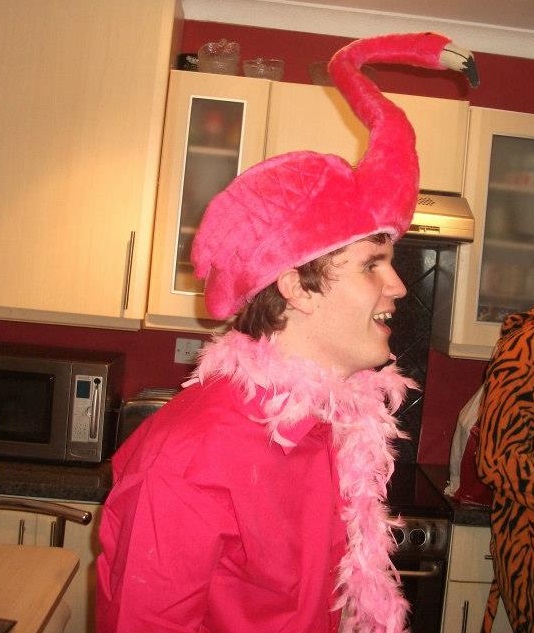 We’re all animals when it comes down to it. But is the use of animal comparisons in description and character development useful and effective? Or just lazy and unimaginative?

One of my absolute favourite parties that I went to was animal-themed, which I attended as a flamingo, as the photo above evidences. Since then, I adopted the animal as part of my persona – flamboyant and decidedly elegant when it suits. One thing I have never done in any of my work (so far) is compare a character to a flamingo. A wealth of other animals do feature, however.

Animals are great descriptive devices. Not just for the looks and movements of a character, but also for their thought processes and to an extent, even their overall personalities and the reasons why they interact with other characters a certain way. A lot of what I call “Literary Snobs” deem this as lazy and unimaginative, but I think it works beautifully if used creatively, rather than the same old clichés that you come to learn at school.

A few of my favourite authors use it to varying degrees. Victor Hugo has a lovely, considerably-sized passage in Les Misérables that muses on how everyone has some form of animal in their nature. It comes as he introduces the novel’s primary (misguided) antagonist, Inspector Javert.

Granted the supposition that in every man there is contained a species of the animal kingdom, we may at once place Inspector Javert. The Asturian peasants believe that in every wolf-litter there is a dog-whelp which the mother kills, because otherwise when it grows larger it will devour the rest of her young. Endow this dog with a human face, and you have Javert.

Jean Valjean, the protagonist of the novel, is likened to a wolf, on a number of occasions throughout the story, primarily to symbolise the criminal (and you can read more about that in this article).

The wolf is a pretty easy one to go to – you hear of lone wolves all the time in real life. But what about other mammals? Or birds? Or shellfish? J.K. Rowling memorably compares Severus Snape (my favourite character) to an overgrown bat more than once, while her librarian Irma Pince is likened to “an underfed vulture.” It works superbly, especially when used so creatively. You can immediately picture what these characters are supposed to look like.

Philip Pullman takes the use of animalistic imagery to the next level in the His Dark Materials books, wherein every human (or witch) is partnered with a daemon – an animal familiar that embodies their personality. I expect the flamingo would come into play again for me here if we started assigning daemons to our own friends and family…

Animals are also prevalent in Dickens’ work, which is, as you may know, one of the key inspirations to my own novels. In Little Dorrit, fearsome antagonist Jeremiah Flintwinch is referred to more than once as “crab-like”. More specifically, “…the little keen-eyed crablike old man.”

The main anti-hero for the upcoming The Berylford Scandals: Sin & Secrecy – Abel Stirkwhistle – is partly inspired by Flintwinch. In this novel, we find Abel approaching his sixties and still suffering the disastrous effects of a stroke, including an awkward and jagged way of movement. So, as a partial homage to Dickens and Flintwinch, I decided to really play up the crab comparison. As time goes on, you may see this description evolve, and he becomes less of your beach variety of crab and more of a sea monster.

Abel isn’t the only character to get the animal treatment in some form. When we first get re-introduced to Lady Vyrrington, she is compared to a slightly rheumatic swan, while Mrs Haffisidge retains her mouse-like qualities from the first book.

There is also a degree of “hunter and hunted” about this story, so I have used a lot of predator and prey-based imagery. Mice and cats or hawks, rabbits and foxes, flies and spiders.

What do you think? Are spirit animals a great way to envisage a character? Or is it unimaginitive? What animal would you liken yourself to? Let me know in the comments below. And for more news and content or to get in touch, please follow my Facebook, Twitter and Instagram pages.

Labelling the Vyrrington butler Whitlocke is complicated. In Lust & Liberty, he is not really a protagonist, as he poses a lot of threats and obstacles to Lady Vyrrington, the main anti-heroine. However, he is not a villain either, since his motives are not evil. They stem from his loyalty to his master, Lord Vyrrington. Whitlocke is one of those ambiguous characters.

And this role continues in Sin & Secrecy. He assists both Abel Stirkwhistle and Lady Vyrrington as a sort of scout for information, but also as a messenger. His relationship with his mistress is very much the same; since Abel is the main focus of S&S, I thought it would be fun to explore his friendship with Whitlocke a little further. They have known each other for years and, despite the class difference, they're of a similar intellectual level. That was why I thought it fitting and believable to make them drinking partners. It gives me an outlet to have Abel talk about things he couldn't necessarily confide in Lady Vyrrington...

from Chapter XV of The Berylford Scandals: Sin & Secrecy

Whitlocke was stood at the bar when Abel entered the tavern, almost knowing psychically that the arrival of the ageing crustacean of a man was imminent. The butler handed Abel a glass of red wine, which he took with the keenness of a child at the sight of sweets.

“What’s wrong?” Whitlocke asked Abel, leading him through a glass-paned door into the snug of the tavern. It was more of a private lounge for the two men; they were the only ones who ever went in there. It had been installed for the benefit of the Berylford ladies, but none would dare even enter The St. Barbara’s Arms, much less drink in there, however privately.

Abel’s response to Whitlocke’s question was prefixed by a heavy sigh and he wearily took his seat.

“This schoolteacher thing will be the death of me,” he groaned, gulping his wine.

“And a few days too long. Last time we advertised a job at the schoolhouse we had responses left, right and centre in no time at all!”

“Yes, but if I remember rightly, the woman your sister hired was on the run, was she not?” returned Whitlocke snidely.

“One schoolmistress dies in mysterious circumstances, that’s not enough to put off the criminals,” he observed, “But two die in such circumstances, even the amoral among us won’t answer the advertisement. The only ones we can’t put off are those who aren’t remotely qualified.”

“For someone who hates the job so much, you don’t seem to be in too much of a hurry to pass it along to someone else!” he said.

“Berylford isn’t Kensington, Abel. The children here aren’t going to be great statesmen or thinkers or writers. Those that live to see fourteen will either end up in the army or on the farms. Or in service.”

“You could have been a statesman if I recall correctly. You chose service.”

“I chose Lord Wilson Vyrrington. It was you and your family that made me believe service wasn’t something to be ashamed of.”

“Perhaps. But I fail to see the point you’re trying to make here, Whitlocke.”

“It doesn’t matter how qualified they are,” the butler replied, “As long as they can read, write and manage arithmetic, and can teach the children to do the same, that’s all they need to fit them for the world. What’s more important for you is to get out of that place. Before you add yourself to its increasing body count!”

Abel finished his glass of wine. His mouth formed a stilted smile.

“See?” he said, “Such wisdom and common sense are wasted in service! Even to one such as Lady Vyrrington! I’m going to buy you another drink.”

George Whitlocke's surname was originally Burgess, which I changed to name him after one of my great-grandparents. He was of the original 40 characters created back in 2008 for the first definitive Berylford story. His relationship with Lady Vyrrington was always acrimonious, even in those early drafts. I had not decided why at the time, however, since the story involving the affair with Jesse Blameford had not been written or even thought about.

When we think of butlers and other servants, we generally see them as loyal people who are devoted to their employers' every need. I wanted to challenge that. And the simple way to do that was to have Whitlocke and Lady Vyrrington mutually hate one another. But they tolerate each other for the sake of their other loved ones: Lord Wilson and Amethyst. However, it made sense for them to put aside their differences in times of grief, such as the death of Lord Wilson and those of the Vyrrington children.

Like Abel, Whitlocke is somewhat based on Dickens' Jeremiah Flintwinch from Little Dorrit. Not physically, of course - primarily in his relationship with his employer. Flintwinch is both an ally and an obstacle to Mrs Clennam in the same way that Whitlocke is to Lady Vyrrington. Otherwise, the character is quite original. However, I have heard a reader of Lust & Liberty compare him to Tommy Lascelles, as portrayed by Pip Torrens in The Crown on Netflix. That rigid and unwavering devotion to the proper order of things. This was quite accidental, but something I'm bearing in mind as I revise Sin & Secrecy.