The second meal to come out of our recent trip to Yorkshire sees us visiting Harrogate for a delicious seafood feast. All courtesy of The Drum & Monkey…

One of the top priorities of my trip to Yorkshire earlier this month was to visit Brontaè’s Bar & Restaurant in Horsforth. The other was to have an afternoon tea in the famed Betty’s Café Tea Rooms in Harrogate, the elegance of which I marvelled at when it was featured on an episode of Remarkable Places to Eat with Fred Sirieix and Nadiya Hussain. It was impossible to book, being just the one of me. And so I had to chance it. With my luck, it wasn’t a surprise to see a queue around the side of the building. Absolutely no hope of getting in quickly. Having made the journey from Leeds to Harrogate (a modest half-hour), I went off in search of an alternative. An alternative that I eventually found in The Drum & Monkey seafood restaurant.

Harrogate reminds me a lot of Brighton in its Lanes-like series of little streets and walkways. With all manner of delights on every corner, and plenty in between. It was through this otherwise aimless exploration that I found The Drum & Monkey. The dining area is quite small; seats 20 covers at most, I’d say. Perfect for the solo diner to stay out of the way. 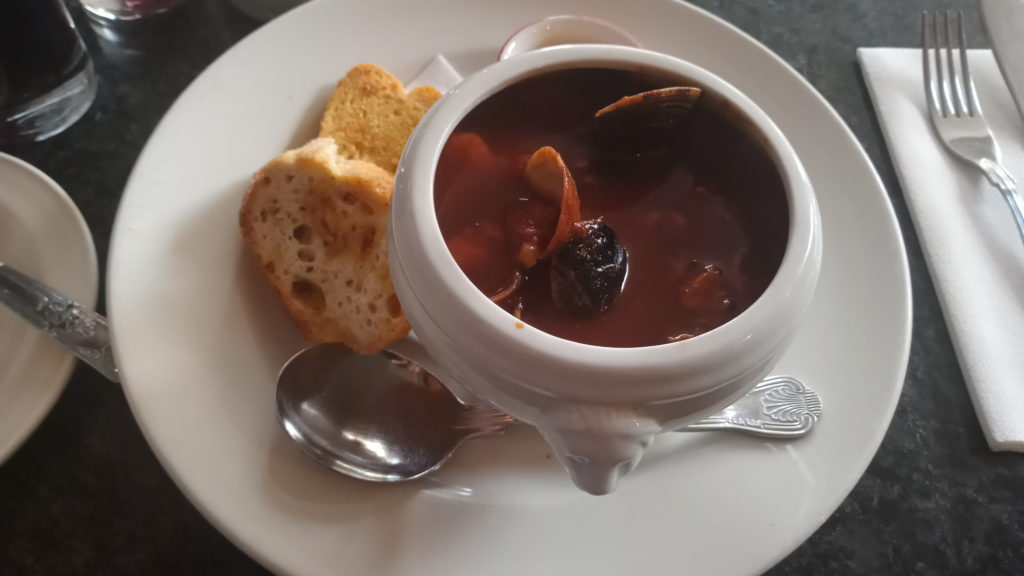 The last time I had bouillabaisse, it was a waste of time. I was deathly ill with tonsillitis at the time, and so I barely tasted a thing. There was me thinking a hot fish stew would be just the thing to soothe a pained throat and give me a load of goodness. I was very wrong. So when I saw it on the menu of The Drum & Monkey, I couldn’t turn it down. And the second time was truly the charm.

You might be looking at that picture and thinking the bowl is quite small. I will tell you now that, while that may be the case, it was jam-packed full of fishy goodies. The stew itself was sumptuous and rich, the salt of the seafood perfectly balanced with sweet-umami tomato flavours. And I have to give a huge shout-out to the croûtons. None of your tiny, rock-hard bread nuggets here. These were two proper pieces of bread, deep-baked and (I believe, anyway) infused with garlic. A match made in Heaven if ever I tasted it. 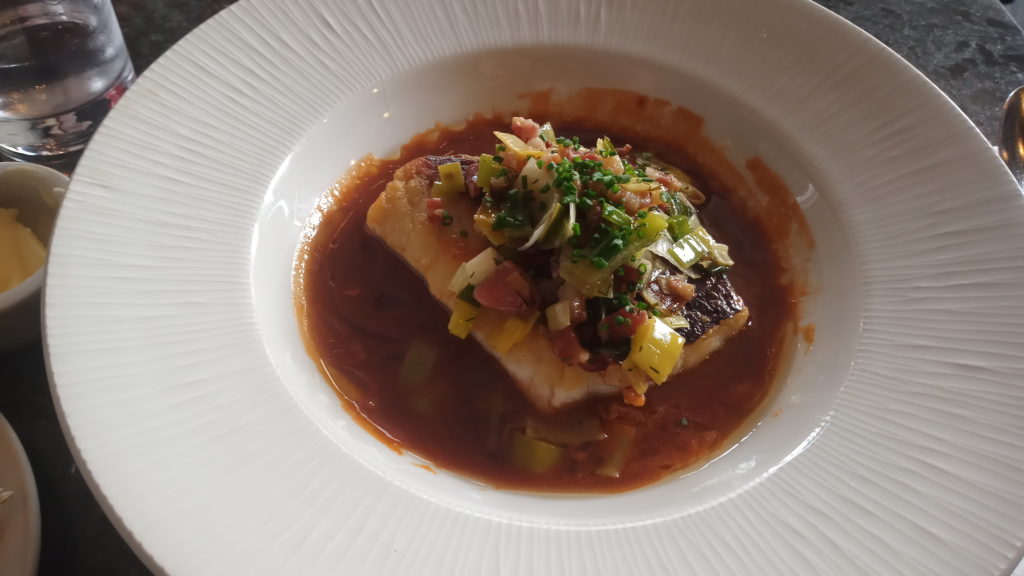 Why not follow one rich sauce with another? I felt the fish in this dish (as is so often the case in seafood pieces) played second fiddle to its accompaniments. Which included among them braised leek, pancetta, and a Pedro Ximénez sauce. The latter, a sherry wine, is believed by some to be the sweetest wine in the world. And when combined with all those other flavours – the onion notes from the leeks and the salt from the pancetta – the end result, somewhat magically is a rich, almost brandy-caramel kind of taste.

As I say, I really feel this dominated the hake, which ended up being little more than a vehicle, albeit a very succulent one, for that sauce. Don’t mistake that as me regretting my choice. Overall, I was very pleased. 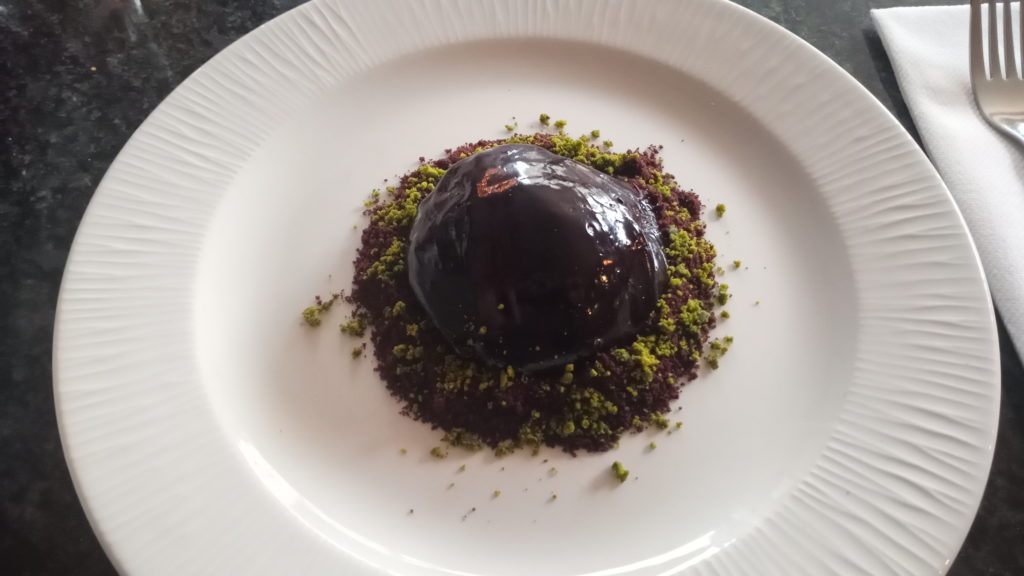 Like my trip to Brontaè’s, I had to seriously consider whether or not I could manage a dessert. In my earlier restaurant critiquing days, I don’t think I would have thought twice. We talked ourselves around, don’t worry. And while I was a bit underwhelmed when the Layered Chocolate Bombe I ordered first arrived, in truth it was just the ticket. Neither too big nor too rich; something relatively light to draw a line under the meal.

I pictured something more like a sphere, whereas this was more of a mound, as you’ll see from the image. A very hard outer chocolatey shell, concealing some delicious cherry filling deeper down. We all know chocolate and cherry are a happy marriage, so there were no complaints coming from that combination. The pistachios adding a bit of greenery to the otherwise dark dish did pretty little else, I won’t lie. In retrospect, I wonder if the chef was aiming for a forest floor kind of presentation?

THE DRUM & MONKEY – THE FINAL VERDICT

Of my two meals out in Yorkshire this trip, The Drum & Monkey has to take second place, sadly. While all three dishes were commendable in terms of flavour and presentation, I felt there was a lot to be desired in terms of atmosphere. I also felt the service was only as attentive as it needed to be; there seemed to be no real effort to go above and beyond. All the same, if you’re in Harrogate and fancy a seafood dinner, definitely give it a go.

For more author news and views, my Facebook and Instagram pages are here. And drop a subscription to my YouTube channel to remain informed of the latest, plus some exclusives. Furthermore, my fortnightly podcast, The Dale Hurst Writing Show, is available to listen to here on Spotify.

5 Tips for Staying Creative in Quarantine